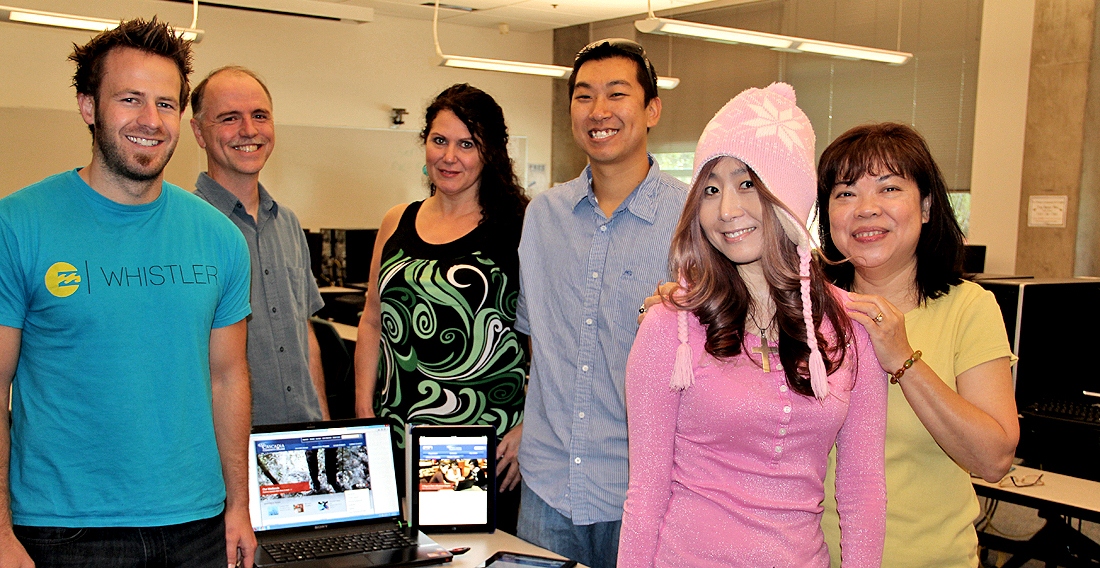 Think you know a typical community college student when you see one? Think again.

As students in Cascadia’s web applications degree program, Lina Cho, Diana Harris, Ben Harrison, Minh-Ha Ngo, and Henry Ngoy were required to complete a work-based internship project.  Lucky for us, after sifting through proposals, they chose to develop the first mobile pages for the college’s web site.  Each one of them brought different skill sets, working styles, and backgrounds to the project.

Lina Cho speaks three languages and is originally from Korea. As a fashion designer who’s previously studied architecture in college, she brings a visual eye to web programming. One of her goals is to use web development skills to help launch her online fashion collection.

“One thing that I really like about Cascadia is the close relationship between faculty and students.Faculty care about a student’s future.” - Cho

Seattle-born Diana Harris isn’t new to information technology. She’s been programming mainframes for a decade. But after a series of lay-offs she chose to pursue a degree in the high-demand field of web development. She says funds from Worker Retraining made it possible for her to steer her life in a new and “more marketable” direction.

“I appreciate that the staff makes each student feel valued. Cascadia feels like family.” - Harris

Ben Harrison, a Snohomish native, has a BA degree in applied mathematics from the University of Washington. After graduation, he tested games for Xbox 360, PC, and PS3 for about 5 years but found he wasn’t learning anything new. Ben decided to reboot his career and says the challenges involved in learning web development have been very rewarding.

“I’m learning and pushing myself.” - Harrison

Minh-Ha Ngo attended the University of Pharmacy in Vietnam for three years before fleeing to a refugee camp in Indonesia. She eventually made her way first to Canada where she worked as a nursing aide and then to the United States where she found employment as a customer service representative. A degree in web applications from Cascadia promises to fulfill a dream that she began 25 years ago.

”Learning to work as a team, to coordinate schedules, and stay motivated were every bit as important as using (technical) skills. It’s been a challenging project.” - Ngo

After graduating from high school in Bothell, Henry Ngoy logged 10 years in the finance and billing departments of large corporations. He credits the Cascadia internship program, however, with teaching him the importance of communication and teamwork in the workplace.

”The most rewarding part of this experience is being able to look back and see how everything came together.” - Ngoy

"These internships are not a simulation of professional work. These students are actually doing professional work," says Brian Bansenauer who served as the faculty resource for the team. He explains it is critical for students to gain experience outside the classroom for several reasons: It closely parallels actual workplace practices and expectations; they work for a client who has expectations; it requires that they find answers to problems they encounter; and they get the gratification of seeing their work used in a professional setting.

During fall quarter, student interns will conduct user testing on the new pages, optimize for more devices, and work to launch the next batch of mobile pages.