A selection committee comprised of Cascadia faculty and one member of the Foundation Board of Directors is responsible for making a recommendation for one or more faculty to receive the ETLS Award. The number of awards available will be dependent upon the proceeds available from interest earned or increases in investment values for the Excellence in Teaching, Learning, and Service Award Endowment Fund established and managed by the Cascadia College Foundation.

Any member of the Cascadia community, including students, faculty, administrators, staff, and trustees, may nominate faculty for this award.  Faculty previously nominated who have not been selected as recipients (in the past five years) may be re-nominated.  Faculty members may self-nominate, as well.  To be eligible for the award, the individual or individuals must have taught at least 15 credits at Cascadia College. 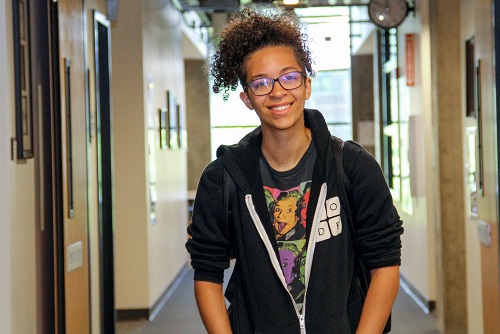 Mei’lani Eyre may be one of the more focused and determined students Cascadia has seen in a long time. She is, and has been, eminently active in her community, has maintained a 3.8 GPA in Cascadia’s new Applied Bachelors in Mobile Applications (MOBAS) degree program, and has dedicated herself to tackling social inequities through technology.

Even from an early age, Mei’lani knew the trajectory of her path. As a high school student in Kirkland, technology captured her imagination – software development in particular. It inspired her to find ways to bring tech-centered skills and careers to underserved communities. She is a founding member of IdeaX Teen Council, a King County Library System volunteer group that writes computer software curriculum for children. She speaks regularly at conferences, in classrooms, and at events. She has worked at Code.org and Black Girls Who Code. More recently, Mei’lani began working with Bothell Library’s Girls Who Code Club where she plans to expand these services to underserved areas in the community. In early 2018, she volunteered with iUrbanTeen, where she expanded access to Seattle’s technology industry for underserved youth.

“I want my future career to be centered around software development, education, and an approach I learned about called inclusive design…. Smartphones are cheaper and more accessible than a computer. This makes them the perfect platform for an inclusive and accessible education product. I hope to develop products that utilize this combination of technology and ideas.”

Mei’lani has experienced her share of challenges. She has lost close friends through tragedy and suffered abuse by people she trusted. Though her professional accomplishments grew each year, her well-being suffered. Over commitment led to exhaustion – and exhaustion to illness. "Keeping busy," she commented, "may be an effective way to avoid your problems, it’s not a healthy approach to resolving them."

“Within two years I felt like a soulless husk… I became isolated and detached from myself and my needs. Connecting with others became a serious challenge. At this point, I had lost most of my support system.”

Mei’Lani reached a point where she could no longer ignore her declining health. She began to see how she had put everything she’d accomplished at risk. She finally began to heed the advice of her doctors. She simplified her life, stopped saying yes to every project, and began learning the art of self-care.

As a recipient of several Foundation scholarships, including the Richard Dakin Award for Cybersecurity Scholars, Mei’lani is deeply thankful for the support and assistance she has received along the way. Teachers, mentors, library staff – just to name a few – formed a network that supported and guided her boundless energy. The financial support she received through the Foundation made it possible for her to continue her studies while getting the help she needed.

As the recipient of the 2019-20 American Association of University Women Scholarship, Mei’lani is back on track – and will graduate with one of Cascadia’s first MOBAS bachelors degrees next year.

prevnext
About the Foundation
Print

The Foundation supports the college's efforts to enhance student success and strengthen our communities.

Cascadia College Foundation provides essential financial assistance to students in need through scholarships, grants, and loans and also supports important college programs. With your help, we will continue to assist students who are striving for success and prepare them to give back to the community which has so generously supported them.

Foundation Annual Report to the Community

Check out the Cascadia College Foundation Snapshot and see how your generous support is making a difference!

Learn about "Belonging at Cascadia" through our 2018 Annual Report.

The board of directors provides leadership for the foundation which is a non-profit 501(c)3 organization aligned with Cascadia College. Directors support the college and its students by building relationships and developing resources in the community. Directors are elected by their peers to serve up to three consecutive three-year terms.

Top
How You Can Help
Print

Give to the CCF Annual Fund.

The Annual Fund supports a variety of vital foundation and college programs including more than 20 annual Cascadia College Foundation scholarships and hundreds of small grants and loans for students.

Build a legacy while creating a better future for our students and our community. Establish a new scholarship based on your interests or those of a special loved one.

You can help grow a permanent legacy of support for Cascadia students by contributing to endowment funds that have already been established.

Your Generous Support Can Change Lives, One Student at a Time. How Would You Like to Make an Impact?

Learn more about how you can make a difference for our students and our community. Email the foundation or call 425.352.8840.

Send your checks to:

Participate in an Event

Be a part of the action and change lives. Participate in the Annual Make Dreams Come True Fundraising Breakfast or other foundation events throughout the year.

Make a lasting impact on the community and leave a meaningful legacy that demonstrates your commitment to quality education. Include the Cascadia College Foundation in your plans.

Many employers match their employees' charitable contributions at anywhere from 30-500%! Make your donation go even further by asking your employer to match it.

If you're a Cascadia employee, you can easily support the foundation through payroll deduction as part of the Cascadia Team Giving  [DOC] program.

If you would like to support the Cascadia community of lifelong learners with a contribution of another sort, like stocks and securities or in-kind, non-cash donations, please contact the foundation. We will be glad to work with you.

If you have questions about any of these giving opportunities, please email the foundation or call 425-352-8840.

The Cascadia College Foundation gratefully acknowledges our most generous annual donors, those who contribute $1,000 or more to the foundation, for providing vital support to important college programs and a crucial, financial assistance to deserving students.

Your generosity provides the critical private support that changes lives -- one scholarship, loan, or grant at a time.

As a member of The President’s Club, you will receive:

We are extremely grateful for the support of our President's Club members whose leadership gifts help us build a better future for our students and our community.

The foundation supports small grants for students who have unmet needs. Contact foundation@cascadia.edu for information.

In specific situations, the foundation can provide short-term loans to bridge the gap until a student has obtained long-term financial assistance. Contact foundation@cascadia.edu for information.

The foundation proudly awarded scholarships to the following deserving student recipients for the 2018-19 school year.

Congratulations to one and all!

The Excellence in Teaching, Learning, and Service Award was created to recognize the contributions of individuals or groups of faculty who have made exceptional contributions to the college's mission and vision in one or more categories:

History of the Award

Any member of the Cascadia community — students, faculty, administrators, staff, or trustees — may nominate faculty for the award. To be eligible, nominated faculty must have completed the equivalent of 15 credits of teaching at Cascadia College.

Thank you for supporting the Cascadia College Foundation!